Fighting antimicrobial resistance: a challenge for all 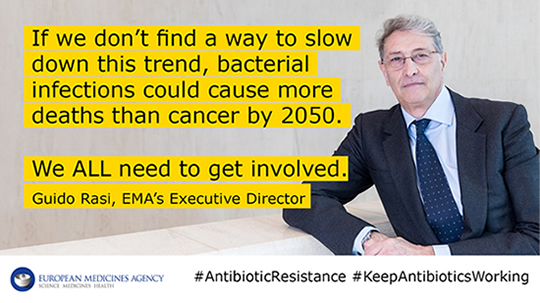 Antibiotic resistance is on the rise worldwide. If we don't find a way to slow down this trend, bacterial infections could cause more deaths than cancer by 2050. Common infections such as pneumonia, tuberculosis, sepsis or gonorrhoea are becoming harder and harder to treat.

Antimicrobial resistance affects humans and animals in every part of the world. To fight this threat, we ALL need to get involved and act responsibly: farmers who need to reduce the amount of antibiotics given to their livestock; doctors who should think twice before prescribing antibiotics to sick patients; patients who take antibiotics without a prescription to treat cold or flu, which are not even caused by bacteria; pharmaceutical companies who must increase their efforts to develop new antibiotics and help researchers in their challenge.

This also includes European Union bodies and institutions. Under the European Commission's One Health Action Plan against Antimicrobial Resistance, the European Medicines Agency works very closely with its sister agencies, the European Centre for Disease Prevention and Control (ECDC), the European Food Safety Authority (EFSA) and the European Environmental Agency (EEA) to do our bit to #KeepAntibioticsWorking. And we need to act now, so that common infections will not become common killers again.