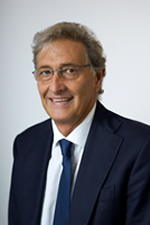 Professor Rasi was nominated as Executive Director for a five-year mandate by the Management Board of the Agency on 1 October 2015. He was appointed following his statement to the European Parliament's Committee on Environment, Public Health and Food Safety (ENVI) on 13 October 2015.

“I am very happy to be back at the helm of the Agency,” said Professor Rasi on his first day in office. “We are currently undergoing the most significant transformation of the system of medicine development and authorisation that I have seen during my 35-year career in public health, either as a doctor, a researcher or a regulator. It is exciting and challenging to be leading the Agency during this time.”

Professor Rasi will outline his priorities for the next five years to representatives of the media at a virtual press briefing to be held on Wednesday, 9 December at 14:00 GMT. Please reply to press@ema.europa.eu before close of business on Monday, 7 December to register for this briefing. We will then send you log-in details prior to the briefing.

An information sheet explaining the

process for the appointment of the EMA Executive Director is available. A photo and biography of Professor Rasi are also available.