On 18 March 2015 the European Medicines Agency (EMA) marked its 20th anniversary with a scientific conference entitled 'Science, Medicines, Health: Patients at the heart of future innovation'.

At the conference, representatives from academia, the pharmaceutical industry, patient organisations, health-technology-assessment bodies, international regulators, the European Commission, national competent authorities and EMA discussed how best to support and shape innovation in order to improve the health of people in the European Union.

Video of the conference 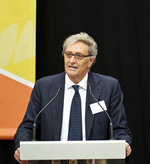 Guido Rasi opened the 20th anniversary celebration, commenting that "the best way to celebrate is to start preparing EMA for the future. Three words – complexity, opportunity, patients – sum up the key issues that EMA needs to address."

Ladislav Miko also welcomed guests. "This is truly a year of celebration as 2015 also signals another important anniversary - it is 50 years since the adoption of the first European law on the authorisation of pharmaceuticals," he said. 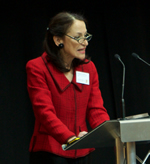 Margaret Hamburg paid tribute to EMA for its efforts in the field of medicines evaluation, and commended the European approach to science-based medicines regulation and promoting public health. Referring to the EMA/FDA relationship, she added: "together we have made valuable progress at a critical point in time."

Elias Zerhouni gave a keynote address entitled: 'EMA: the next 5 years - the innovator's perspective' in which he called for a greater harmonisation of medicine regulation around the world. In his address, he lauded EMA for its achievements and presented the Agency as a good example of unified regulation across a region. "Now that needs to happen globally," he added.

Watch Elias Zerhouni delivering his keynote address and see his

Sir Mark Walport also delivered a keynote address: 'What do I expect from the EMA in the next five years?' He reinforced the need for regulatory science and the importance of regulators understanding patients' values.

Following the keynote addresses a panel discussion took place, moderated by Malcolm Rowland, Professor Emeritus from the School of Pharmacy at the University of Manchester.

Watch the panel discussion and hear questions from the floor. 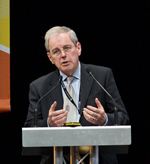 Sir Kent Woods closed the event, commenting that the conference had been a "very fine example of the type of multi-sectoral discussion and dialogue which we need to help see the way forward over the next few years."