Cartridges, pre-filled pens and vials changing from yellow to red and yellow

The colour of cartridges, pre-filled pens and vials of the rapid-acting insulin Fiasp is changing from yellow to red and yellow following cases where patients have mistakenly injected Fiasp instead of the long-acting insulin Tresiba (available in the EU as light green cartridges and pens) or the other way around. Such mix-ups, due to the similar colour of the products especially in poor lighting, can cause hypo- or hyperglycaemia (low or high blood glucose levels), which can lead to serious health problems.

Patients who have been prescribed both these medicines should be careful to avoid mixing them up and healthcare professionals should make patients aware of the risk, particularly during the time while yellow Fiasp products are still available. Pharmacists will receive a letter with this information and local timelines for when red and yellow Fiasp products will be introduced.

Fiasp and Tresiba are medicines containing insulin used to control blood glucose levels in patients with diabetes. Fiasp is a rapid-acting insulin (insulin aspart) intended to be injected at mealtimes, whereas Tresiba (insulin degludec) has a long duration of action and is injected once a day. By using the two medicines, patients can control their blood glucose throughout the day. 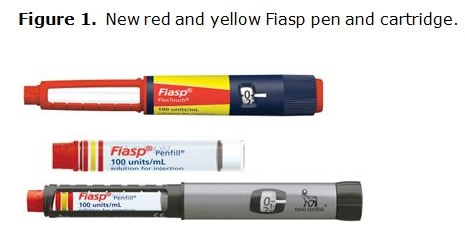 More about the medicine

Fiasp is a medicine that is used to treat adults with diabetes. It contains a rapid-acting insulin called insulin aspart. Fiasp is a solution for injection available in vials, cartridges or pre-filled pens. It is usually taken by injection under the skin around mealtimes and used in combination with an intermediate - or long-acting insulin that is taken at least once a day. Tresiba is an example of a long-acting insulin (insulin degludec) that is taken in combination with Fiasp.

Diabetes is a disease in which blood glucose is high, either because the body cannot produce insulin (type 1 diabetes) or because the body does not make enough insulin or cannot use it effectively (type 2 diabetes). The replacement insulin in medicines such as Fiasp and Tresiba acts in the same way as the body's own insulin and helps control the level of blood glucose and reduce the symptoms of diabetes.