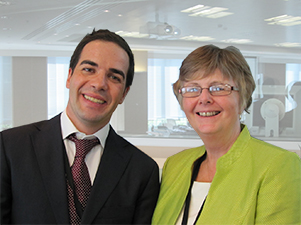 At its September 2012 meeting, the European Medicines Agency's Committee for Orphan Medicinal Products (COMP) elected Professor Bruno Sepodes from Portugal as its chair and Ms Lesley Greene, a volunteer patient representative for Eurordis, as its vice-chair. Both have been elected for a three-year mandate.

Prof. Sepodes brings his academic experience as a research scientist in pharmacology, immunopharmacology and pharmacotoxicology to his role as chair of the COMP, a committee that has a long tradition in dealing with state-of-the-art pharmaceutical innovation. He first became a member of the COMP in 2008 following nomination by the European Commission on the recommendation of the Agency.

Ms Greene's election continues another tradition of the COMP: since the establishment of the Committee in 2001, the vice-chair has always been a representative of a patient organisation. This highlights the importance the contribution of civil society to the work of the COMP.

During its September 2012 meeting, the COMP adopted a total of 12 recommendations for orphan designation. One of these medicines is recombinant human lecithin cholesterol acyltransferase, intended for the treatment of lecithin cholesterol acyltransferase deficiency, an ultra-rare enzyme deficiency affecting around 60 patients in Europe. There are currently no satisfactory treatments available for these patients.

Orphan designation can be granted early in the development process to substances that are intended for diagnosis, prevention or treatment of life-threatening or very serious conditions that affect not more than 5 in 10,000 people in the European Union (EU) or that would not be developed without incentives.

For the full list of opinions adopted by the COMP during its September 2012 meeting, please see the

The COMP's recommendations for these substances are sent to the European Commission for the adoption of a decision. Once an orphan designation has been granted, sponsors have access to certain incentives during the development of the medicine. For each medicine that has been granted an orphan designation by the European Commission, the Agency publishes a summary of the opinion on its website.

Systematic publication of agendas and minutes

In line with the plans of the Agency's Executive Director Guido Rasi to publish the agendas and minutes of the scientific committees, the COMP will publish the minutes of its July 2012 meeting next week.

From now on, each meeting's minutes detail the outcome of the COMP monthly meeting and will be published systematically after their adoption at the following monthly meeting. The Committee will also start publishing its agendas every month, starting with its October 2012 meeting.