In 2013, the European Medicines Agency's (EMA) Committee for Medicinal Products for Human Use (CHMP) recommended 81* medicines for human use for marketing authorisation, compared with 57 in 2012.

Of note, two new advanced therapy medicinal products (ATMPs) were recommended for approval in 2013, bringing to four the total number of ATMPs recommended for approval by the CHMP since the legislation on advanced therapies became operational (the first one was approved in 2009 and the second one in 2012). These innovative medicines are derived from gene therapy, cell therapy or tissue engineering and can offer groundbreaking new opportunities for the treatment of disease and injury.

Also, the number of recommendations for marketing approval of medicines intended for the treatment of rare diseases is steadily increasing (11 in 2013 compared with 8 in 2012 and 4 in 2011), showing the success of the European orphan-medicinal-product regulation, which came into force in 2000.

In 2013, 16 new medicines for the treatment of cancer were recommended for marketing authorisation, of which 12 contain a new active substance. Most of these medicines are considered to be targeted therapies, designed to block the growth and spread of cancer by interfering with specific molecules involved in tumor growth, or act on the patient's immune system.

Particularly noteworthy in the other therapeutic areas is the recommendation of three medicines for the treatment of multidrug-resistant tuberculosis, an orphan indication associated with a very high mortality rate and whose burden has rapidly increased in recent years in the absence of new treatment options.

The Agency has mechanisms in place, such as conditional marketing authorisation, approval under exceptional circumstances and accelerated assessment, to facilitate or accelerate market access for medicines that fulfill unmet medical needs or that could not be made available under a standard approval because the disease they target is too rare and comprehensive data cannot be provided.

Also, opinions for two compassionate use programmes were given in 2013 for the treatment of hepatitis C virus (HCV) infection. These programmes are intended to give patients with a life-threatening, long-lasting or seriously disabling disease with no available treatment options access to treatments that are still under development.

Listening to the specific needs and views of patients and healthcare professionals has become increasingly important for the Agency as it enriches the scientific evaluation of medicines. The EMA uses various mechanisms to gather input from them, e.g. through the involvement of patients and healthcare professionals in scientific advisory groups or ad-hoc expert groups, providing input and advice to the CHMP in relation to the evaluation of specific types of medicines or treatments.

In 2013, the CHMP recommended initial negative opinions for seven medicines, two of which were transformed into positive opinions following re-examination procedures.

Eight applications for initial evaluation were withdrawn by the sponsors prior to CHMP opinion.

In 2013, the Agency started the assessment of 79 applications (compared with 95 in 2012) for the initial evaluation of medicines. The decrease observed is mainly due to fewer marketing authorisation applications received for generics and biosimilars. Further information on initial evaluations started in 2013 can be found in the 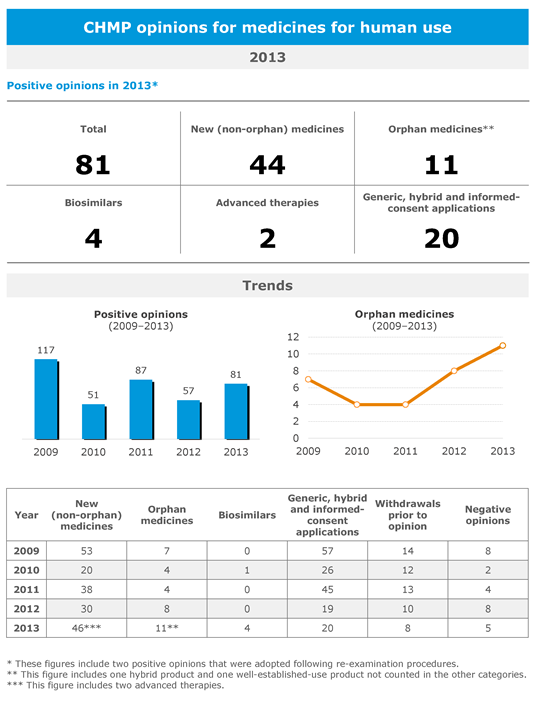