First statistics on PRIME are released

Four medicines in development are accepted under the scheme

The European Medicines Agency (EMA) has released today the

outcome of the assessment of the first batch of applications received from medicine developers for its PRIME (PRIority MEdicines) scheme, a new initiative that aims to foster research on and development of medicines that have the potential to address an unmet medical need.

18 applications for PRIME were received as of 6 April 2016 and subsequently assessed by EMA's Scientific Advice Working Party, Committee for Advanced therapies (CAT) and Committee for Medicinal Products for Human Use (CHMP). Four medicines have been accepted for PRIME.

EMA is making available detailed information on the applications that have been granted or denied access to PRIME, including statistics on the type of applicants, the therapeutic areas represented and the data supporting the applications.

The names of the four active substances that will benefit from PRIME support are also released.

Going forward, the Agency will release information on PRIME on a monthly basis, on the Wednesday following the plenary meeting of the CHMP. The information will be part of the annexes of the CHMP highlights.

Since 6 April 2016, another 14 applications have been received and are being processed by EMA.

PRIME was launched on 7 March 2016 to foster research on and development of medicines that have the potential to address an unmet medical need, i.e. offer a major therapeutic advantage over existing treatments, or benefit patients with no current treatment options for their disease.

Through PRIME, EMA offers early, proactive and enhanced support to medicine developers to optimise the generation of robust data on a medicine's benefits and risks and enable accelerated assessment of medicine applications. This will help patients to benefit as early as possible from therapies that may significantly improve their quality of life.

EMA assesses the applications received taking into account the available treatments for the target disease, the stage of development of the medicine and the data presented.

The fact that a medicine is not accepted in PRIME does not mean that its development should not be pursued. Medicines that are not granted PRIME access can still benefit patients by providing alternative treatment options for a disease. 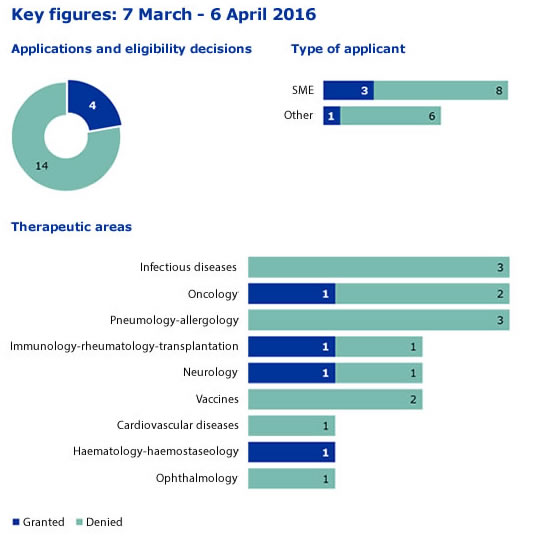