Number of medicines with new active substances continues to increase

In 2014, the European Medicines Agency (EMA) recommended the highest number of orphan designated medicines for marketing authorisation in a year. Out of the 82 medicines for human use recommended in 2014, 17 are intended for the treatment of a rare disease, providing therapies for patients who often have only few or no treatment options.

Among them is the first medicine for the treatment of Duchenne muscular dystrophy (Translarna) as well as the first treatment for erythropoietic protoporphyria, a rare genetic disease which causes intolerance to light (Scenesse).

The past year also saw the first recommendation worldwide of a therapy based on stem cells. The orphan medicine (Holoclar) is a treatment for limbal stem cell deficiency (LSCD), a rare eye condition that can result in blindness.

Special regulatory pathways were used for these three medicines (conditional marketing authorisation for Translarna and Holoclar, and approval under exceptional circumstances for Scenesse). These mechanisms are in place to potentially speed up market access for medicines that fulfill unmet medical needs but for which comprehensive data cannot be provided at the time of application for a marketing authorisation.

Eight new medicines for cancer were recommended for marketing authorisation in 2014, of which Lynparza, Imbruvica, Gazyvaro and Cyramza target rare cancers that are difficult to treat. A targeted treatment for melanoma patients whose cancer has a specific mutation was also recommended for approval in 2014 (Mekinist).

Overall, the number of medicines containing new active substances continues to increase. One in two medicines, either orphan or non-orphan, recommended for approval in 2014, contains a substance that has never been used in medicines before. These medicines have the potential to treat diseases for which no treatments were previously available or bring added benefit to patients over existing therapies.

During the past year, EMA provided more scientific support in the early stages of medicine development. Almost seven out of ten applicants received scientific advice from EMA's Committee for Medicinal Products for Human Use (CHMP) during the development phase of their medicine and this figure rises to four out of five when it comes to innovative medicines. This is a significant increase compared with 2013 when only half of applicants who had a positive opinion for their medicine had received scientific advice.

Seven positive opinions were granted after an accelerated assessment in 2014 (Daklinza, Harvoni, Exviera, Viekirax, Ofev, Sylvant, Ketoconazole HRA). This mechanism aims to speed up the assessment of medicines that are expected to be of major benefit for public health.

Four of these are for the treatment of chronic hepatitis C virus (HCV) infection. The CHMP used the accelerated assessment tool to make a new generation of medicines available to patients potentially more quickly; these treatments have high cure rates and have recently reshaped the way patients with chronic HCV infection can be treated.

In the past year, the CHMP granted a paediatric-use marketing authorisation (PUMA) for Hemangiol for the treatment of proliferating infantile haemangioma, which are benign tumours of blood vessels. PUMAs can be granted for medicines which are already authorised, but no longer under patent or supplementary certificate protection, and that have been developed specifically for children. As an incentive to stimulate the development of existing medicines for the treatment of children, PUMA medicines are granted ten years of market protection.

For each of these medicines, EMA's Pharmacovigilance Risk Assessment Committee (PRAC) and CHMP adopted a risk management plan (RMP) to ensure that safety is monitored throughout the lifecycle of the product allowing appropriate regulatory action to be taken if any new risk arises. 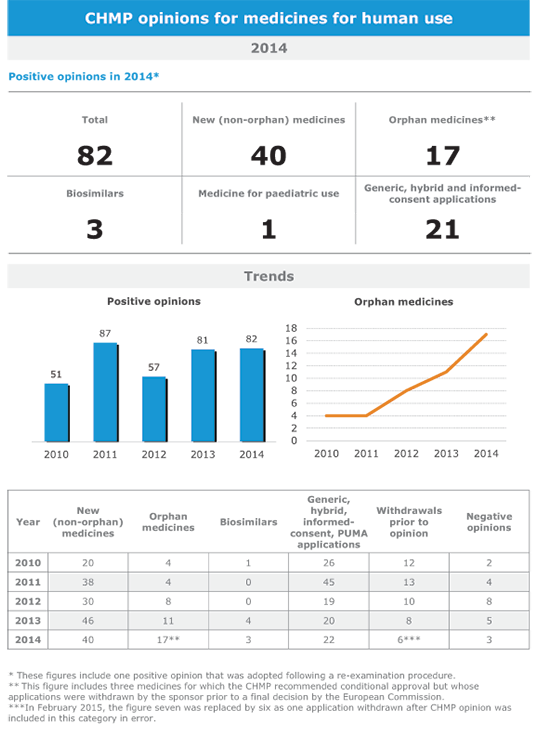