The European Medicines Agency has a number of important tasks and responsibilities relating to the development of paediatric medicines. These responsibilities, granted through the European Union (EU) Paediatric Regulation, enable the Agency to stimulate research into the uses of medicines in children and to lead to their authorisation in all age groups.

Before the Paediatric Regulation came into effect in 2007, many medicines authorised in Europe were not studied adequately or authorised in children. This caused difficulties for prescribers and pharmacists treating children, as well as for their patients and carers.

The Regulation introduced sweeping changes into the regulatory environment for paediatric medicines, designed to better protect the health of children in the EU. The main change was the creation and operation of the Paediatric Committee to provide objective scientific opinions on paediatric investigation plans (PIPs), development plans for medicines for use in children.

Paediatric medicines in the product lifecycle

Action plan for supporting development of medicines for children

EMA and the European Commissions maintain a joint action plan on boosting the availability of medicines for children and increasing the efficiency of paediatric regulatory processes:

EMA and the European Commission update this action plan as new information becomes available. The current version contains an update on the status of each action and concrete achievements as of December 2020.

The plan identifies actions in five key areas, to address the challenges identified by the European Commission’s ten-year report on the implementation of the Paediatric Regulation:

EMA and the European Commission published the action plan in March 2018.

Development of the action plan also took account of ideas on How to better apply the Paediatric Regulation to boost the development of medicines for children collected during a multi-stakeholder workshop in March 2018.

The European Network of Paediatric Research at the European Medicines Agency (Enpr-EMA) is a network of research networks, investigators and centres with recognised expertise in performing clinical studies in children.

Enpr-EMA's main objective is to facilitate studies in order to increase availability of medicines authorised for use in the paediatric population. It provides access to European and international specialty and multi-specialty networks who can help developing a PIP and recruiting patients for clinical trials.

The Agency works closely with its international partners on medicines for children:

Principles for the involvement of young patients in EMA's Paediatric Committee

The Agency acknowledges that it may be helpful to consult children and young people as part of the Committee's work. It has therefore established principles for the involvement of young patients, consumers, and their carers, including identifying in which situations it may be helpful to seek their input and defining what is expected from them when they are consulted.

This follows a public consultation on the

concept paper on the involvement of children and young people at the Paediatric Committee .

Paediatric guidance on extrapolation of efficacy and safety data

Guidance is available for medicine developers on how they should present the use of extrapolation of efficacy and safety data from adults to children in their regulatory applications.

This covers the methodology medicine developers use to identify the clinical data required to show that the therapeutic response in children can be similar to that in adults.

The guidance complements EMA’s framework for paediatric extrapolation in medicine development, which is described in the reflection paper available via the link below:

Report: How to better apply the paediatric legislation to boost development of medicines for children 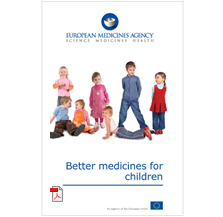