The emerging and steady increase of microbes that are resistant to antimicrobial treatments has become a global public health concern that threatens the effective treatment of infectious diseases. Combatting this threat, particularly resistance to antibiotics, is a high priority for the European Medicines Agency (EMA) and the European medicines regulatory network.

Antimicrobial resistance is when a microbe evolves to become more or fully resistant to antimicrobials which previously could treat it. Antimicrobials include antibiotics, which kill or inhibit the growth of bacteria.

A well-known example of a bacterium that is resistant to a number of antibiotics is meticillin-resistant Staphylococcus aureus (MRSA), which has caused infections that are difficult to treat across the European Union (EU).

The emerging and steady increase in the occurrence of bacteria that are resistant to multiple antibiotics has become a global public health threat due to the lack of therapeutic options to treat certain infections in humans.

Infections by multidrug-resistant bacteria are estimated to cause 33,000 deaths in the EU every year. Antimicrobial resistance also places a tremendous burden on healthcare systems and society, with an annual cost due to healthcare expenditures and productivity losses estimated at approximately €1.5 billion in the EU.

Although the development of resistance occurs naturally when microorganisms replicate themselves erroneously or when resistant traits are exchanged between them, the use and misuse of antimicrobials accelerates the emergence of resistant strains.

The lack of new antibiotics entering the market exacerbates the problem.

Antimicrobial resistance affects both humans and animals and resistance can also spread from animals to humans through the food chain or direct contact.

EMA plays a vital role in the global response to the threat of antimicrobial resistance, by:

EMA supports a 'One Health' approach, promoting a close and integrated cooperation between the human and veterinary fields. For more information on the Agency's work in each sector, see: 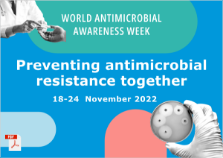 Every year, European Antibiotic Awareness Day (EAAD) takes place on 18 November. The Day is a health initiative that provides a platform and support for national campaigns on the prudent use of antibiotics in the EU / European Economic Area (EEA).

These cards provide recommendations on what all of us can do to make sure that antibiotics remain effective. They include information for patients, healthcare professionals, veterinarians, farmers, public health leaders and pharmaceutical-industry staff.

This coincided with the European Commission announcing that the use of antibiotics reached a record low in 2021. Its Eurobarometer survey on the use and perceptions of antibiotics in the EU found that only 23% of Europeans took oral antibiotics during that year, the lowest number since 2009.

However, use varied widely across Member States, from 15% in Sweden and Germany to 42% in Malta.

What's more, many Europeans still take antibiotics without justification. This includes taking them:

EMA also supported the European Commission's previous action plan against the rising threats from antimicrobial resistance, by providing scientific input and recommendations on the use of antibiotics in animals, in partnership with other relevant EU bodies, including the European Centre for Disease Prevention and Control (ECDC) and the European Food Safety Authority (EFSA).

EMA, the Japanese Pharmaceuticals and Medical Devices Agency (PMDA) and the United States' Food and Drug Administration (FDA) are working together to facilitate a single development program for new antibacterials that satisfies the regulatory requirements of each of the three agencies.

At a third meeting between the three agencies in October 2017, they agreed to align how clinical trials should be designed to study the effects of new antibiotics in certain indications, such as uncomplicated gonorrhoea or uncomplicated urinary tract infections.

They also committed to working together to explore how to better streamline paediatric development of new antibacterial agents. For more information, see:

At their second meeting in April 2017, the agencies agreed to align their data requirements for certain aspects of the clinical development of new antibiotics in order to stimulate the development of new treatments. For more information, see:

The agencies first met in September 2016 to discuss regulatory approaches for the evaluation of antibacterial agents.

They concluded that a comprehensive and multifaceted response is needed to encourage and accelerate development of new antibacterial medicines, and agreed to explore common regulatory approaches. For more information, see:

The EU and the United States (US) established the Transatlantic Task Force on Antimicrobial Resistance (TATFAR) as a result of the 2009 US-EU summit to intensify cooperation in the fight against antimicrobial resistance. By 2021, government agencies from Canada, Norway, and the United Kingdom also joined. EMA is a member of TATFAR.

The taskforce aims to increase levels of communication, coordination and cooperation between the EU and the US on human and veterinary antimicrobials. 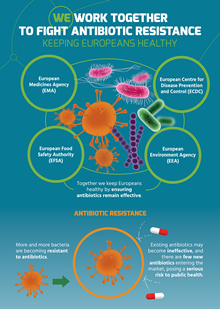 visual guide  on how the EU agencies support the fight against antibiotic resistance and help to ensure that antibiotics remain effective.

Video: Antimicrobial resistance – A challenge for everyone