The adaptive pathways approach is part of the European Medicines Agency's (EMA) efforts to improve timely access for patients to new medicines. Adaptive pathways is a scientific concept for medicine development and data generation which allows for early and progressive patient access to a medicine. The approach makes use of the existing European Union (EU) regulatory framework for medicines.

Adaptive pathways is based on three principles:

This concept applies primarily to treatments in areas of high medical need where it is difficult to collect data via traditional routes and where large clinical trials would unnecessarily expose patients who are unlikely to benefit from the medicine.

The approach builds on regulatory processes already in place within the existing EU legal framework. These include:

Adaptive pathways does not change the standards for the evaluation of benefits and risks or the requirement to demonstrate a positive benefit-risk balance to obtain marketing authorisation.

EMA ran a pilot project between March 2014 and August 2016 to explore the practical implications of the adaptive pathways concept with medicines under development.

This pilot provided a framework for informal dialogue between stakeholders, including patients and health technology assessment bodies, to explore different options in a 'safe harbour' environment and consider detailed technical and scientific questions based on concrete examples.

At the end of the pilot, 6 of the applicants had received parallel advice from EMA and HTA bodies and 1 benefited from EMA scientific advice.

EMA published a final report on lessons learned in August 2016:

For more information on the pilot, see:

EMA is exploring the adaptive pathways concept further in the context of parallel scientific advice with HTA bodies, with the inclusion of additional stakeholders, such as patients and payer organisations.

Additional support is available to eligible development programmes in an additional pre-submission meeting prior to the one foreseen by the parallel scientific advice procedure, allowing companies to discuss their options and ideas before drafting the protocols that will be the subject of scientific advice.

Medicine developers interested in taking this approach may submit a proposal to EMA following the guidance published in August 2016:

In December 2016, EMA, in collaboration with the European Commission, hosted a workshop to discuss the adaptive pathways concept with stakeholders in light of practical experience gained during the pilot project and to plan the next steps in exploring the concept.

EMA has published a

EMA and the European Commission will explore ways to integrate these proposals and address concerns within the existing regulatory system.

The presentations and video recording are available on the event page. 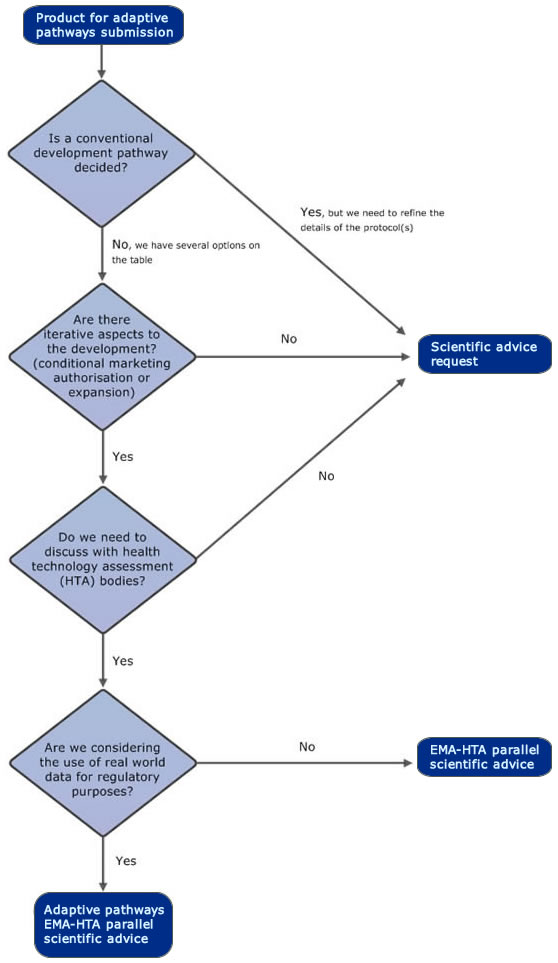 In parallel to EMA's adaptive pathways project, the Innovative Medicines Initiative (IMI) runs ADAPT-SMART, a project investigating the conceptual framework that could be used in adaptive pathways, including tools and methodologies.

The IMI is a European public-private collaboration bringing together 32 participants for which EMA is the scientific leader.