Modelling and simulation: questions and answers

The European Medicines Agency's (EMA) provides an overview of its position on specific issues related to modelling and simulation in the form of questions and answers (Q&As).

Users should read the Q&As in conjunction with the relevant scientific guidelines.

The Committee for Medicinal Products for Human Use (CHMP) and the Paediatric Committee (PDCO) may seek the input of the Modelling and Simulation Working Party (MSWP) to address specific questions in relation to modelling and simulation.

EMA publishes the MSWP's input on this page. The date after each questions refers to when it was first published.

Questions about Modelling and Simulation, activities of the MSWP and other general enquiries: Send a question to the European Medicines Agency.

The Q&A refers to cases where the aim of the pharmacokinetic (PK) studies and/or simulations will be to define dose regimens for paediatric patients targeting concentrations which have been shown to be effective and safe in adults. A prerequisite is that the therapeutic range, the relevant exposure metrics linked to efficacy and safety and the exposure response relationship are established in adults. Examples of relevant exposure metrics are area under the concentration-time curve, maximum concentration, or minimum concentration. The model that will serve as a basis for predictions needs to be adequate for the intended use.

Different presentations of the data should be available for regulatory decision making. In the following, some example figures are given to illustrate which aspects will be important for regulatory evaluation (e.g. in the context of a paediatric investigation plan, a scientific advice, or an application for marketing authorisation).

In general, the most relevant covariate to influence PK in paediatric patients is considered to be body weight accounting for size differences, in addition to age in the youngest paediatric patients to account for maturation of drug eliminating processes (see Question2). Therefore, the example plots are depicted with body weight and age as covariates but comparable figures will be needed if other covariates are considered necessary. 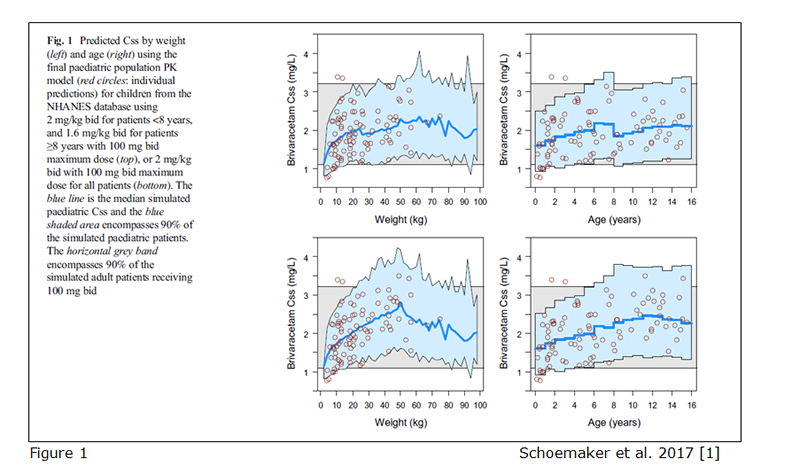 If different doses are proposed for bands of weight or/and age, exposure ranges predicted for the proposed doses for the subsets of the paediatric population should be visualized as boxplots (example figure 2). The reference range in the adult population (median and outer percentiles of observed or simulated data) should be given additionally (example figure 2). The same statistics should be presented in numbers in tables. 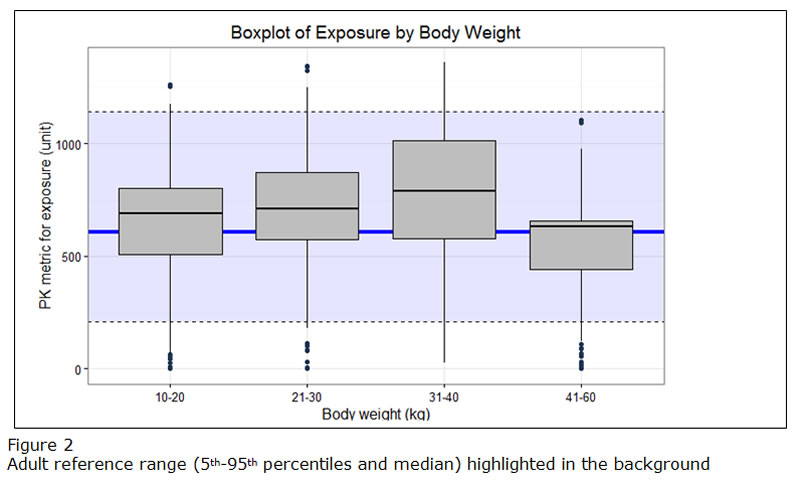 Overall, the recommended dosing regimen should follow as closely as possible the function describing the PK in paediatrics. To illustrate this, a figure comparing the proposed doses to the doses resulting from the underlying function (e.g. allometric scaling) should be provided (example figure 3). In this case, alternative 2 (the green line) is considered as the optimal dosing regimen. 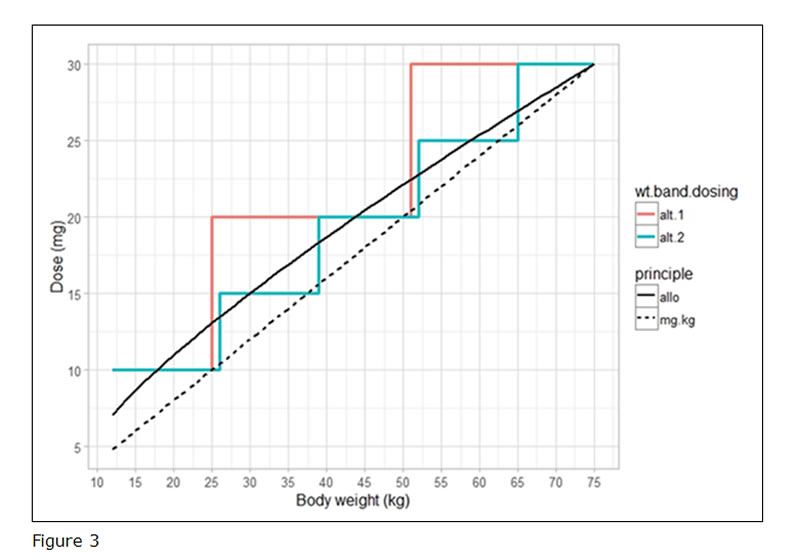 It is important to include body weight relationships when describing pharmacokinetic (PK) in paediatric patients. The theoretical values of allometric exponents (0.75 for clearance and 1.0 for volume of distribution) are considered to have physiological basis [1], and often provide adequate explanation for body weight relationships in paediatric patients [2,3]. The exponents are often estimated and for different reasons these estimates may differ from the theoretical values. In neonates the maturation level of eliminating organs influences the estimates and in adults the body composition will affect them. It is often the case that the data generated in the context of a paediatric development program are too limited to conclude on whether the estimates of the allometric exponents are in fact different from the theoretical values. The selection of allometric scaling exponents should be based on the available information on the pharmacology of the drug and age of the target population, in conjunction with known properties of organ maturation [4]. In light of the theoretical framework, the MSWP considers the use of fixed exponents both scientifically justified and practical when developing population PK models in children however, regardless of whether estimated or fixed allometric exponents are used, the selected approach should be scientifically justified in the analysis plan. Further, it is not advised to use allometric exponents estimated using adult data for paediatric PK models, as adult exponents are likely to be affected by other factors than pure body size relations (such as obesity and model misspecifications).

The inclusion of factors related to ontogeny or organ maturity are essential to ensure the accuracy of developed models. Where appropriate, factors associated to changes in growth (body weight and size, organ weight), organ function (gastrointestinal (GI) pH, GI volume, GI transit times, portal vein flow rates, cardiac output), tissue composition (plasma proteins, water and fat composition), clearance (renal [figure 1], biliary) or metabolic processes [Cytochrome P450s (CYPs) [figure 2], Uridine diphosphate-glucuronosyltransferase, (UGTs)]) should be accounted for in the model. The relevance of factors and therefore their inclusion in the model should be based on the pharmacology of the drug, the age and physiology of the target population and the dose and route of administration of the drug. The level of evidence required for a model (e.g. in vitro vs. in vivo CYP expression [1,2], comprehensive vs sparse pharmacokinetic (PK) data, etc) depends on whether it is used for descriptive purposes or for extrapolation. Nonetheless, models require the similarities and potential differences between source and target population to be described and assumptions in the model should be justified [3], and where appropriate, models should be qualified (i.e. for physiologically based pharmacokinetic (PBPK) models) if used to support labelling.

By its very nature, maturation is a time-dependent factor, and cannot be explained using allometric scaling. Significant changes in weight or by maturation either over the course of a study or the duration of treatment should be accounted for as appropriate. For example, changing body weight and maturation should be accounted for in a PK model where there is significant change during the treatment duration; this is especially true for premature neonates who undergo a catch up phase of growth, and as such, simply investigating baseline bodyweight in this sub-population may lead to erroneous conclusions. Maturation is generally described using a sigmoid Emax or Hill equation model, although linear or exponential models can be used [4]. Many PBPK modelling platforms include an ability to account for processes that are subject to ontogenic maturation. Where appropriate, maturation should be included in population PK modelling.

Care needs to be taken to bridge results from a specific (healthy) population to the target paediatric population, especially where disease progression would have an impact on maturation and ontogeny [1]. Where modelling is used to characterise dose-exposure-response relationships, developmental maturation and disease progression should also be taken into account e.g. neurological development for anti-epileptic drugs [5].