Committee for advanced therapies – election of new chair, overview of 2013 and looking ahead

“While only few advanced therapies have been authorised so far, there are many products in the pipeline as reflected by the volume of pre-authorisation activities in the Committee for Advanced Therapies (CAT). The committee will continue its efforts to enhance the development and availability of new medicines in this area,” said Paula Salmikangas, the new chair of the European Medicines Agency's (EMA) Committee for Advanced Therapies on the day of her election.

The committee elected Dr Salmikangas as new chair for a three-year mandate at its February 2014 meeting. She succeeds Christian Schneider, who had chaired the committee since its creation in 2009. A Finnish national, Paula Salmikangas has qualifications in biochemistry and in cell and molecular biology. She has been senior researcher at the Finnish Medicines Agency (Fimea) since 2003. She was previously the vice-chair of the CAT, a position she held since the establishment of the committee.

The CAT is the committee at the EMA responsible for assessing the quality, safety and efficacy of advanced-therapy medicinal products (ATMPs).

In 2013, two new ATMPs were recommended for marketing authorisation by the Agency's Committee for Medicinal Products for Human Use (CHMP). This brings to four the total number of ATMPs recommended for approval by the CHMP since the legislation on advanced therapies became operational in 2009.

These innovative medicines are derived from gene therapy, cell therapy or tissue engineering and can offer groundbreaking new opportunities for the treatment of disease and injury.

Medicines in all categories of ATMPs have now been approved in the European Union with one gene therapy (Glybera in 2012), one cell therapy (Provenge in 2013) and two tissue-engineered products (ChondroCelect in 2009 and MACI in 2013).

In 2014, the CAT forecasts that three to four initial applications for marketing authorisation of advanced therapies will be submitted to the EMA. These applications should include the three types of ATMPs.

The CAT delivers scientific recommendations on ATMP classification. This procedure gives companies developing innovative new treatments the opportunity to check whether their product can be considered an ATMP and can therefore benefit from the regulatory pathway and the available scientific guidelines for these types of medicine. This procedure often constitutes the first contact between the Agency and developers of ATMPs.

The Agency obtains an overview of the medicines that are being developed through its interaction with sponsors during the classification procedure, the scientific advice procedure and a number of other pre-authorisation mechanisms such as the Innovation Task Force. With regard to ATMPs, it appears that three quarters of medicines in the pipeline are cell-based products while one quarter represents gene therapies. Among the companies that have approached the CAT for the classification procedure, 50% are micro-, small or medium-sized enterprises (SMEs) and 15% are non-profit organisations.

Non-commercial sponsors and SMEs are the main developers of ATMPs. In October 2013 the CAT co-organised with the Translational Centre for Regenerative Medicine Leipzig of Leipzig Univertsity a workshop to provide developers, in particular academics and small companies, practical advice on the European authorisation procedure for ATMPs and the tools and support available to them. This was the second workshop that the CAT co-organised with a learned society to promote development of ATMPs and raise awareness of the regulatory tools available.

The workshop also brought together representatives from industry, academia and regulators to address specific issues related to cell-based medicines, including products combined with medical devices, and define the regulatory path for translation of research into commercial medicinal products.

At any stage of the development process, SMEs can request that the CAT assess quality data and, when available, non-clinical data that they have generated for their medicine.

In 2013, the CAT recommended issuing the first certification of non-clinical data for an ATMP. As part of this procedure, the CAT reviews each non-clinical study presented by the developer (such as toxicology, carcinogenicity and pharmacology studies) and provides feedback in terms of medicine development.

The certification procedure is an opportunity for SMEs to get an assessment of the data they have generated and identify any potential issues prior to the submission of a marketing-authorisation application. The scientific advice procedure, involving experts from the CAT and the CHMP, can be used by companies to obtain further, prospective scientific input in the development of their ATMP.

In 2014, the CAT will initiate preparatory work to develop more guidance for ATMP developers. In May, the committee will organise a closed workshop on cell therapy for cardiac repair which will bring together experts in the area with the aim of discussing specific guidance on the topic. The guidance should provide specific scientific and regulatory requirements for this type of medicine.

In addition, a reflection is ongoing to develop guidance on potency testing, or the quantitative measure of the biological activity of a medicine. This aspect has proven to be particularly difficult during the development of ATMPs, in particular for cell-based therapies, and is regularly covered during scientific advice procedures. Development and validation of specific assays will be addressed in the guidance.

The CAT is the committee at the EMA responsible for assessing the quality, safety and efficacy of ATMPs and following scientific developments in the field. Its main tasks are to:

The CAT was established in accordance with Regulation (EC) No 1394/2007 on ATMPs. In 2014, the European Commission will publish a report on the outcome of the first five years of this regulation to which the CAT contributed. 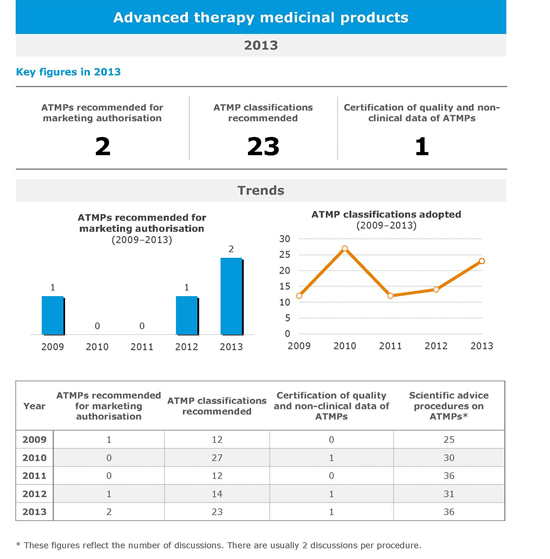