EMA conducts analysis of applications submitted between 1995 and 2014

An analysis of over 100 applications submitted between 1995 and 2014 to the European Medicines Agency (EMA) shows that various challenges can arise in the development of medicines meant to treat central nervous system (CNS) disorders, and highlights the importance of an appropriate design of early-stage clinical trials for future success in the development.

This analysis of the applications for medicines in the fields of psychiatry or neurology, led by staff members of EMA, is published today in Nature Reviews Drug Discovery [1].

Research into medicines for CNS is complex, with a higher rate of failure during the clinical development of these products compared to other fields of medicine. The authors scrutinised the clinical development programs submitted to EMA and assessed by the Committee for Medicinal Products for Human Use (CHMP) as part of marketing authorisation applications for new or existing medicines for a total of 103 applications, including 57 in neurology and 46 in psychiatry. 74 had a positive opinion following the scientific assessment by the CHMP and 29 were rejected or withdrawn. The diseases addressed by these medicines included for example schizophrenia, major depressive disorders, Alzheimer's disease, epilepsy, Parkinson's disease and multiple sclerosis.

Overall, in the course of the assessment, the CHMP identified issues around the efficacy data for the medicines in more than one third of programmes and safety issues in more than half of the programmes.

The analysis shows differences in the types of issues raised for neurology medicines and psychiatry medicines: issues around the planning of confirmatory studies as well as the clinical relevance of the results were more common in psychiatry than in neurology (Figure a). These issues were also shown to be among the ones impacting the outcome of the application the most in psychiatry (Figure b). 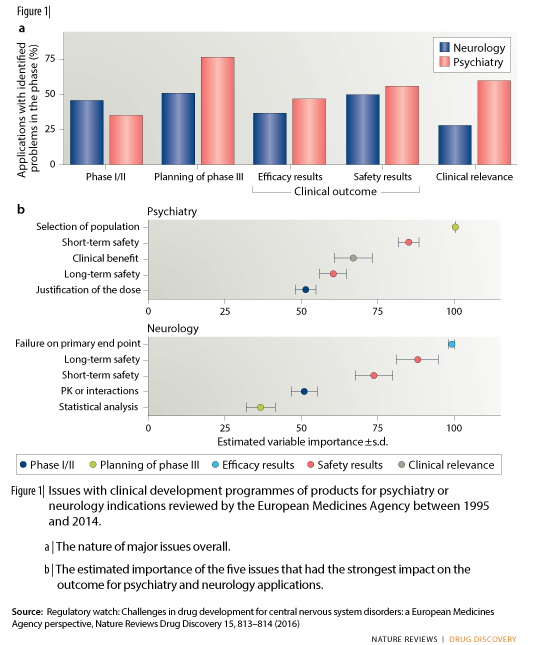