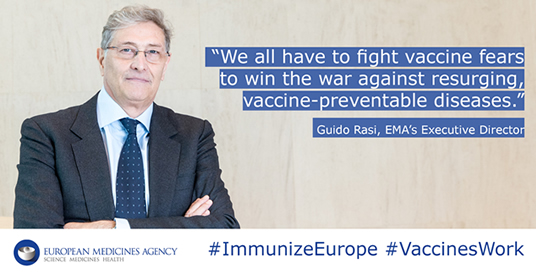 Immunisation has helped us to bring some major human diseases under control - smallpox, diphtheria, tetanus, yellow fever, whooping cough, polio, and measles – to name a few. Worldwide, vaccines are saving the lives of approximately nine million people every year, more than the whole population of Austria. Today, no child in Europe has to die from formerly common childhood diseases.

But we observe an increasing lack of trust in public health institutions, scientists and scientific knowledge itself in Europe and beyond. The main reason is fear, caused by unreliable sources of information and influencers that ignore solid scientific evidence.

Fear is not the only factor. People seem to have forgotten the dreadful consequences of some of the vaccine-preventable diseases.

I call on all parents to protect their children. Vaccines will keep them safe from deadly measles or cervical cancer. If your child is not immunised, this could become a threat for those who are more vulnerable: siblings who are too young to be vaccinated, elderly grandparents, classmates that have special health conditions.

We understand your concerns. Vaccines are not 100% risk-free. But no medicine is. There is a one in a million chance that an adverse event happens and most parents worry that their child could be affected. However, the chance that their unvaccinated child gets sick from an infectious disease is much higher. In Europe, we are actively monitoring the safety of medicines, including vaccines, and also looking at all reported side effects. These are recorded in a database and reviewed regularly to identify any potential problem at an early stage.

Patients, doctors and pharmaceutical companies submit 3,000 reports every day, 100,000 every month and about a million per year. Your contribution is needed: patients, parents and consumers should report suspected adverse reactions. Tell your doctor or notify your national authority.

We all have a role to play in raising awareness of the benefits of vaccines and sounding the alarm about the threat caused by vaccine hesitancy. Keeping children and adults safe with vaccines is a joint responsibility. We need to fight vaccine fears together to win the war against resurging, vaccine-preventable diseases.