This figure includes a number of new innovative medicines with the potential to meet unmet medical needs, treat diseases for which no treatments were previously available or bring significant added benefit to patients over existing therapies. Among these medicines are the anticancer medicines Mekinist (trametinib) and Gazyvaro (obinutuzumab), the anti-inflammatory* Entyvio (vedolizumab), the anti-infective Daklinza (daclatasvir), as well as Translarna (ataluren) and Sylvant (siltuximab), which are both intended for the treatment of rare conditions.

In parallel, the number of medicines recommended for approval via the European Union centralised procedure based on generic or informed consent applications has decreased compared with the first half of 2013 (6 versus 13).

Confirming the trend observed in the past few years, the number of new medicines intended for the treatment of rare diseases is steadily increasing, providing treatments for patients who often have only few or no options. In the first half of 2014, eight medicines were recommended for the treatment of rare diseases. This number includes three medicines for which the CHMP recommended conditional approval but whose applications were withdrawn by the sponsor prior to a final decision by the European Commission **.

Conditional approval is one of the Agency's mechanisms to provide early patient access to medicines that fulfill unmet medical needs or address life-threatening diseases. The CHMP also used this mechanism for the recommendation of the first treatment for Duchenne muscular dystrophy (Translarna), a life-threatening condition.

The CHMP granted two positive opinions after an accelerated assessment for the medicines Sylvant and Daklinza; this mechanism aims to speed up the assessment of medicines that are expected to be of major public health interest particularly from the point of view of therapeutic innovation.

The CHMP also gave an opinion on the use of a new combination product in the treatment of hepatitis C virus (HCV) infection in a compassionate use programme (ledipasvir and sofosbuvir). These programmes are intended to give patients with a life-threatening, long-lasting or seriously disabling disease access to treatments that are still under development. The treatment paradigm of hepatitis C is currently shifting rapidly, with the development of several new classes of direct-acting antivirals. By recommending the conduct of three compassionate use programmes and the marketing authorisation of three new medicines for HCV infection over the past eight months, the Agency is actively supporting this shift which is expected to bring significant added benefit to patients. 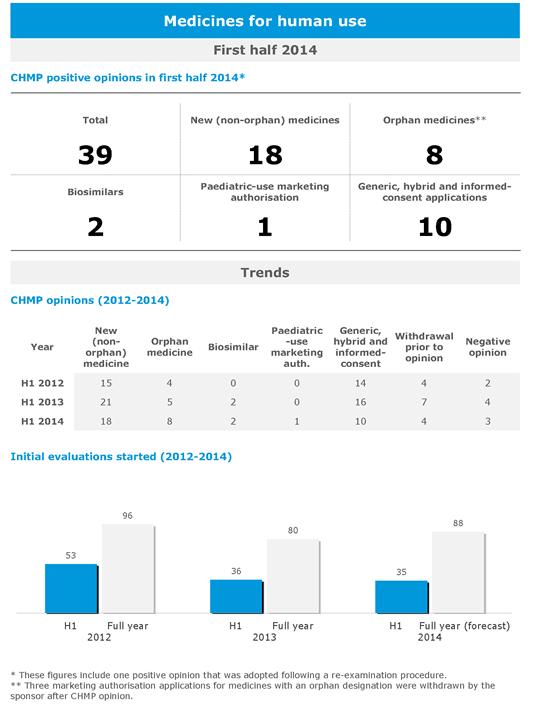 ** The CHMP had recommended a conditional approval for Vynfinit (vintafolide) and its companion diagnostics Folcepri (etarfolatide) and Neocepri (folic acid). After authorisation, the company was to provide confirmatory data from an ongoing study with Vynfinit. However, before the authorisation process could be completed by the European Commission, preliminary data from this study became available which showed that the study could not confirm the benefit of Vynfinit in ovarian cancer patients. Therefore, the company terminated the study and decided to withdraw the applications.