Positive assessment of 2017 operations - Seat Agreement with the Netherlands signed 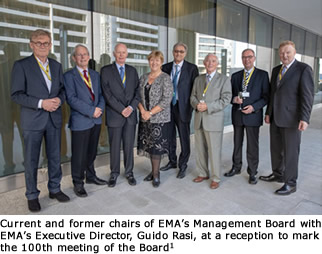 This was the 100th meeting of the European Medicines Agency's (EMA) Management Board. Former chairs of the Board, plus all former Executive Directors of the Agency came to EMA to mark the occasion.

The Board heard an update on progress with the redistribution of the UK's centrally authorised product portfolio for human and veterinary medicines. Re-allocation of over 370 products to new (co-) rapporteurs from the EU27 Member States, plus Iceland and Norway, has been successfully concluded and marketing authorisation holders were informed of the new rapporteurships at the end of April. The new (co-)rapporteurs will only take full responsibility for the reallocated products as of 30 March 2019 when the United Kingdom leaves the European Union (EU).

A knowledge transfer package for each product is currently being prepared and will be provided to the new (co-)rapporteurs in September 2018. The package will contain background knowledge on the regulatory and evaluation history of each product, including the most recent benefit-risk assessment. It will also help each national competent authority to forecast upcoming workload to better support the planning of resources, particularly for complex products in the portfolio.

The Board also discussed and endorsed the next phase of EMA's Brexit preparedness business continuity plan. This will help EMA prepare for a scenario with higher than anticipated staff losses. The next phase will result in a further re-prioritisation of EMA's activities throughout 2019 to maintain as far as possible the Agency's core activities in relation to the evaluation, maintenance and supervision of medicines. It will come into effect in October 2018 to enable staff to be mobilised to cover critical functions where needed. The situation will be monitored and the need for further reduction of activities will be reviewed on an ongoing basis. More information will be provided in due course.

Positive assessment of EMA operations in 2017

The Board has assessed the Executive Director's annual activity report for 2017. Areas of work highlighted by the Board include the Agency's new framework and action plan for academia, the launch of the new EudraVigilance system and the first anniversary of PRIME (PRIority MEdicines), EMA's initiative to enhance support to medicines that target unmet medical needs.

The Board also highlighted the Agency's first public hearing in September 2017 where EMA's Pharmacovigilance Risk Assessment Committee (PRAC) invited patients, doctors and other stakeholders to share their experience with valproate and thus contribute to the safety review of this medicine. During the meeting, the Board heard about lessons learned from the public hearing, just one week ahead of the second public hearing on quinolones and fluoroquinolones which will take place on 13 June 2018.

The annual activity report describes the management and control systems in place at the Agency. Every year it is submitted to the Management Board that assesses whether the Agency has carried out its activities in accordance with the principles of good governance.

The Board acknowledged the high number of achievements which add value for public health in Europe. The Board, however, also cautioned that if EMA does not receive sufficient staff resources in the face of growing workload in product-related activities, and the preparation for Brexit, the ability of the Agency to implement current and upcoming legislation may be impaired.

The Board was updated on the quality and progress of the ongoing development of the EU Clinical Trial and Portal and Database, both of which are being carefully monitored. The Board heard that development of the auditable release of the portal and database (release 0.7) is nearing completion. The release is now in an intensive phase of testing. Where needed, the development resource is being adjusted to ensure quality and progress are maintained in line with the project plan. The Board noted that as details of the Agency's relocation plans are being finalised, some further adjustments to the project planning may be required. The User Acceptance Testing (UAT) of release 0.7 is planned for November 2018 to allow for completion of the relocation of the development data centre, before UAT commences. The audit, which will start in early 2019, will need to accommodate the Agency's staff relocation to Amsterdam in early March 2019.

Planning adjustments for these events are underway. These are not currently expected to have a major impact on overall timing for the project, but will require careful management. Further impact of the relocation is being carefully monitored, and mitigation measures are being put in place where possible, in particular in the event of loss of key Agency or developer staff, unable to relocate. The Clinical Trial system continues to be prioritised in the context of the Agency's relocation business continuity planning. The Board also heard an interim report from the external review of the project and agreed refinements to the governance, reporting and user engagement to support the project through the vital phases of its development.