The Committee adopted a positive opinion for Artesunate Amivas* (artesunate), for the initial treatment of severe malaria in adults and children. This medicine has an orphan designation because malaria has a low prevalence in the European Union.

The CHMP recommended granting a marketing authorisation for Brukinsa* (zanubrutinib), for the treatment of Waldenström’s macroglobulinaemia.

The Committee adopted a positive opinion, recommending the granting of a conditional marketing authorisation for Gavreto (pralsetinib) for the treatment of non-small cell lung cancer.

The CHMP recommended granting a marketing authorisation for Qinlock* (ripretinib) for the treatment of advanced gastrointestinal stromal tumour (GIST).

Vumerity (diroximel fumarate) was granted a positive opinion for the treatment of adult patients with relapsing remitting multiple sclerosis.

Two biosimilar medicines were recommended for approval by the Committee: Hukyndra and Libmyris (both containing adalimumab) for the treatment of inflammatory auto-immune disorders such as arthritis psoriasis, inflammatory bowel disease or uveitis. A biosimilar medicine is a biological medicine that is highly similar to another biological medicine that is already authorised for use.

Two generic medicines received a positive opinion from the Committee: Sugammadex Mylan (sugammadex) intended for the reversal of induced neuromuscular blockade and Rivaroxaban Mylan (rivaroxaban), an anti-coagulant intended for the prevention and treatment of atherothrombotic and venous thromboembolic events in certain at-risk patients.

Negative opinion on a new medicine

The CHMP recommended the refusal of a marketing authorisation for Raylumis (tanezumab). Raylumis was intended for the treatment of pain associated with osteoarthritis.

For more information on this negative opinion, see the question-and-answer document in the grid below.

Recommendations on extensions of therapeutic indication for nine medicines

The Committee recommended granting three extensions of indication for Nucala (mepolizumab), including the extension for the treatment of eosinophilic granulomatosis with polyangiitis. For more information on this extension, see the news announcement in the grid below.

The CHMP has concluded its further analysis of data on the risk of unusual blood clots linked to low levels of blood platelets (thrombosis with thrombocytopenia syndrome, TTS) and on the use of a second dose of Vaxzevria, reinforcing its interim opinion of April 2021. A scientific opinion on these points was requested by the European Commission following the initial reports of TTS associated with the vaccine. EMA analysed all the available data, including the latest TTS data from spontaneous reports in EudraVigilance, detailed vaccination data from Member States and an additional commissioned study of the risk of blood clots that was reviewed in detail by EMA’s safety committee (PRAC).

The evidence did not allow EMA to identify particular risk factors that make TTS more likely. Although spontaneous reports when put in relation to the exposure have suggested that the risk may be higher in women and in younger adults, and lower after the second compared to the first dose, the limitations of the way the data is collected mean that none of these differences could be confirmed.

The CHMP’s detailed assessment report will be published shortly.

The applicant for Nouryant (istradefylline) has requested a re-examination of the Committee’s opinion for this medicine adopted at its July 2021 meeting. Upon receipt of the grounds of the request, the Agency will re-examine its opinion and issue a final recommendation.

The applicant for Nexviadyme avalglucosidase alfa) has requested a re-examination of the Committee’s opinion for this medicine adopted at its July 2021 meeting. Upon receipt of the grounds of the request, the Agency will re-examine its opinion and issue a final recommendation.

Question-and-answer documents on the withdrawals are available in the grid below.

CHMP concludes assessment of presence of a nitrosamine impurity in Champix

The CHMP has concluded its analysis on the presence of impurity N-nitroso-varenicline in Champix at levels above those considered acceptable for EU medicines. Champix should conform to a limit of impurity calculated based on compound-specific ICH M7 principles for a lifetime exposure. The company will now be asked to vary its licence to comply with the set requirements. As a precautionary measure the company that markets Champix had already recalled several batches in June 2021 and paused distribution. The previously circulated direct healthcare professional communication (DHPC) is being revised informing healthcare professionals that further shortages are anticipated. The updated DHPC will be published in the coming days on the following page. As part of the assessment, CHMP considered the criticality of Champix in the context of its current therapeutic use and the availability of alternative treatment options. The CHMP concluded that higher impurity limits were not acceptable as the product was not critical and its absence from the EU market would not create a concern in terms of public health. Patients should not stop taking Champix without first consulting their healthcare professional and talk to them if they have any questions or concerns.

The CHMP re-elected Harald Enzmann as its chair for a second three-year term, starting in September 2021.

Key figures from the September 2021 CHMP meeting are represented in the graphic below. 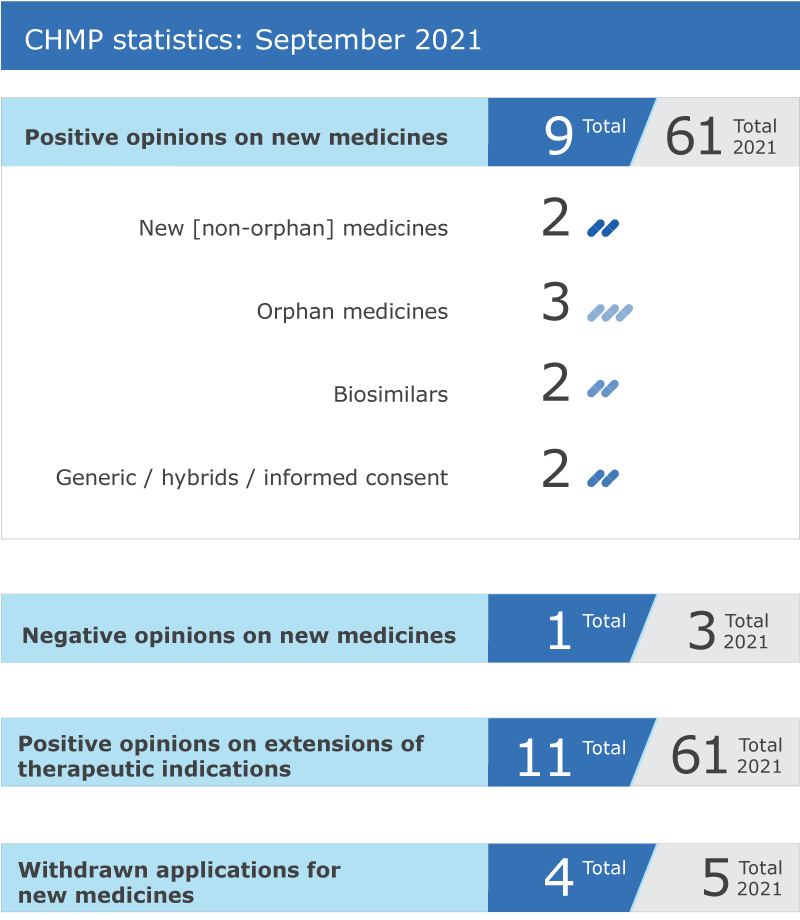 *This product was designated as an orphan medicine during its development. Orphan designations are reviewed by EMA's Committee for Orphan Medicinal Products (COMP) at the time of approval to determine whether the information available to date allows maintaining the medicine’s orphan status and granting the medicine ten years of market exclusivity.

Re-examination of recommendation for new medicines

Positive recommendations on extensions of indications

Important recommendation on new strengths, formulations or routes of administration

Please note that not all documents associated with this page are published at the same time. This page is updated with new documents as soon as they become available. Therefore, users are asked to check the page regularly.