Regulators in EU, Japan and US take steps to facilitate development of new antibiotics

EMA, PMDA and FDA align data requirements and agree on areas of convergence

have agreed to align their data requirements for certain aspects of the clinical development of new antibiotics in order to stimulate the development of new treatments to fight antimicrobial resistance and protect global public health.

Representatives from the three regulatory agencies met in Vienna on 26-27 April 2017 and discussed recommendations for the design of clinical trials that test new treatments for certain types of bacterial infections, including infections caused by multi-drug resistant organisms. They identified a number of areas where the data requirements in the three regions could be streamlined.

EMA, PMDA, and FDA will be working to update their guidance documents respectively. While the updates are ongoing, they will provide advice to individual medicine developers in line with the agreements reached.

This tripartite meeting in Vienna followed an initial meeting that took place at EMA in September 2016 where the agencies discussed regulatory approaches for the evaluation of new antibacterial agents.

Stimulating and facilitating the development of new antibiotics, in particular those targeting multidrug-resistant pathogens, is one of the three pillars in EMA's approach and European Commission's priorities to fight antimicrobial resistance.

Responsible use of existing antibiotics both in humans and animals to limit the development of resistance and preserve the efficacy of medicines for future generations, and the collection of robust data on antibiotic consumption, in particular in animals, to inform antimicrobial policies are the other two pillars. 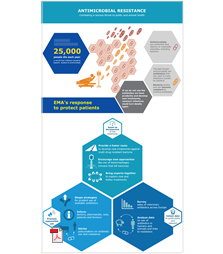