The European Medicines Agency (EMA) contributes to the global response to Ebola outbreaks. Under its plan for managing emerging health threats, EMA supports the development and approval of vaccines and treatments for Ebola, together with other regulators in the European Union (EU) and worldwide.

Ebola virus disease (formerly known as Ebola haemorrhagic fever) is a rare but severe, often fatal illness caused by the Ebola virus, a member of the filovirus family. Death rates in humans have varied from 25% to 90% in past outbreaks.

In 2018, the Democratic Republic of Congo (DRC) declared its ninth and tenth Ebola outbreaks.

The latest oubreak continues in 2019. It is the largest outbreak ever reported in the DRC and the second largest known outbreak in world history, after that affecting Guinea, Liberia and Sierra Leone in 2014 to 2016.

In July 2019, the World Health Organization (WHO) officially declared the latest outbreak in the DRC a public health emergency of international concern. WHO publishes a weekly situation report.

EMA has activated level two of its

According to the European Centre for Disease Prevention and Control (ECDC), there is currently a very low risk of spread to the EU via infected travellers.

Supporting the development of Ebola medicines

EMA works with WHO and regulatory authorities worldwide to advise on potential pathways for the development, evaluation and approval of Ebola medicines.

The investigational prime-boost Ebola vaccine regimen comprising of Ad26.ZEBOV and MVA-BN-Filo could be potentially made available in Europe, if required. EMA's CHMP approved this vaccine for accelerated assessment under the centralised EU marketing authorisation procedure in September 2019.

These two vaccines are recommended by WHO's Strategic Advisory Group of Experts on Immunization (SAGE) for use in Ebola outbreaks.

Through close contact with developers of investigational treatments and with national regulators in the Member States, EMA has identified four treatments that could potentially be made available to patients, if required:

These medicines are being trialled in the DRC. In August 2019, the trial sponsor released important information on the progress of these trials and the implications for the medicines being tested:

For more information on the medicines, see a summary produced by WHO:

EMA maintains close contact with developers of potential vaccines and treatments for Ebola, with a view to supporting the public health objectives of the EU and WHO.

EMA encourages developers of potential Ebola treatments and vaccines to use EMA's regulatory mechanisms to speed up development and approval, such as scientific advice, the accelerated assessment and conditional marketing authorisation procedures.

The EU contributes to the global response to Ebola by providing expert and financial support to partners to deliver humanitarian support in affected areas and facilitate the development of vaccines and treatments for use in those areas.

The European Commission monitors events closely in cooperation with the European Centre for Disease Prevention and Control (ECDC) and WHO during an outbreak. ECDC produces a series of risk assessments, epidemiological updates and other information.

In 2014, the Innovative Medicines Initiative (IMI), a partnership between the EU and the European pharmaceutical industry, launched Ebola+. As part of this multi-million euro research programme on Ebola and related diseases, pharmaceutical companies, academics, regulators and others work together to tackle challenges in Ebola research.

For more information on the EU's response to Ebola and the current outbreak in the DRC, see:

The 2014 outbreak of Ebola in West Africa was the largest and most complex Ebola outbreak in world history. It was unprecedented in terms of scale and geographical spread, mainly affecting the three West African countries of Guinea, Liberia and Sierra Leone.

The World Health Organization (WHO) declared the end of the outbreak in January 2016, with all known chains of transmission having stopped.

EMA established an ad-hoc group of European experts with specialised knowledge in vaccines, infectious diseases and clinical trial design to contribute to the global response.

EMA put in place an accelerated scientific advice procedure, which allowed developers of Ebola medicines and vaccines to request rapid advice for example on clinical trial design, manufacturing-related questions such as scaling-up production or batch release as well as post-authorisation safety monitoring of medicines.

EMA conducted a review of information on various experimental Ebola treatments under development during the outbreak, to provide an overview of the current state of knowledge to support decision-making by health authorities. EMA published an interim report and a final assessment report in February 2018: 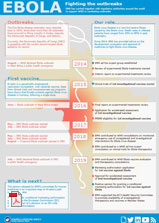