19 new medicines, of which two have been fast-tracked, receive positive opinions from the Committee

At its busiest meeting of 2015 so far, the Committee for Medicinal Products for Human Use (CHMP) recommended 19 new medicines for marketing authorisation.

The Committee recommended granting a marketing authorisation, under accelerated assessment, for Praxbind (idarucizumab) as a specific antidote to the anticoagulant medicine Pradaxa (dabigatran etexilate), when rapid reversal of its effect is required. Praxbind is to be used when a patient taking Pradaxa needs to undergo an emergency surgery or when life-threatening or uncontrolled bleeding occurs. For more information on Praxbind, please see the press release in the grid below.

Entresto (sacubitril / valsartan) was recommended for the treatment of symptomatic chronic heart failure with reduced ejection fraction - a condition where the heart muscle does not contract effectively and less oxygen-rich blood is pumped out to the body. For more information on Entresto, please see the press release in the grid below.

The Committee recommended granting a marketing authorisation for Kyprolis (carfilzomib) to treat patients with multiple myeloma whose disease has relapsed after receiving at least one prior course of therapy. Kyprolis is for use in combination with the medicines lenalidomide and dexamethasone. Kyprolis has an orphan designation and was reviewed under accelerated assessment. For more information on Kyprolis, please see the press release in the grid below.

The CHMP recommended granting a conditional marketing authorisation for Blincyto (blinatumomab) for the treatment of Philadelphia chromosome-negative acute lymphoblastic leukaemia. Conditional marketing authorisations are one of the mechanisms put in place by the Agency to facilitate market access for medicines that fulfill unmet medical needs. Blincyto has an orphan designation.

Cotellic (cobimetinib) was recommended by the Committee for the treatment of metastatic melanoma.

Numient (levodopa / carbidopa) received a positive opinion from the Committee for the treatment of Parkinson's disease.

Ravicti (glycerol phenylbutyrate), which also has an orphan designation, received a positive opinion from the Committee for the treatment of urea cycle disorders.

Ebymect (dapagliflozin / metformin) and Edistride (dapagliflozin) received positive opinions for the treatment of type 2 diabetes mellitus. These medicines were submitted as informed consent applications. This means that the applications make use of data from the dossier of a previously authorised medicine, with the marketing authorisation holder of that medicine giving consent for the use of their data in the application.

The agenda of the September 2015 meeting is published on EMA's website. Minutes of the July 2015 CHMP meeting will be published next week.

Key figures from the September 2015 CHMP meeting are represented in the graphic below.1

More information on this, and all other outcomes of the CHMP's September 2015 meeting, is available in the grid below. 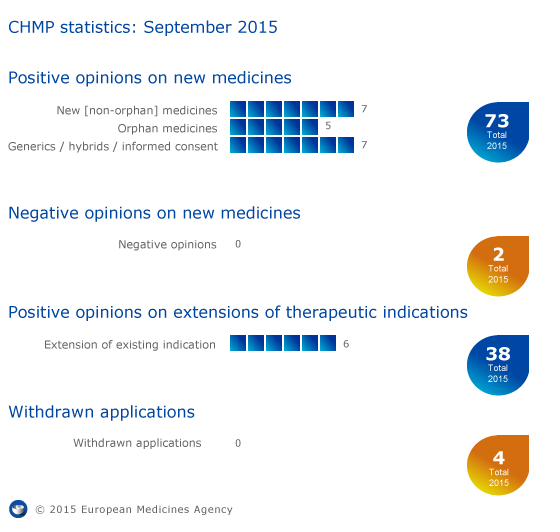 1In addition to the opinions on new medicines, the CHMP also adopted a revised positive opinion for Kolbam (cholic acid) for the treatment of inborn errors in primary bile acid synthesis. The revised opinion follows the annulment on 11 June 2015 of the marketing authorisation for Kolbam in the European Union following a judgment of the General Court.

Please note that not all documents associated with this page are published at the same time. This page is updated with new documents as soon as they become available. Therefore, users are asked to check the page regularly.