The Committee also recommended using JAK inhibitors with caution in patients with risk factors for blood clots in the lungs and in deep veins (venous thromboembolism, VTE) other than those listed above. Further, the doses should be reduced in some patient groups who may be at risk of VTE, cancer or major cardiovascular problems.

The recommendations follow a review of available data, including the final results from a clinical trial1 of the JAK inhibitor Xeljanz (tofacitinib) and preliminary findings from an observational study involving Olumiant (baricitinib), another JAK inhibitor. During the review, the PRAC sought advice from an expert group of rheumatologists, dermatologists, gastroenterologists and patient representatives.

The review confirmed Xeljanz increases the risk of major cardiovascular problems, cancer, VTE, serious infections and death due to any cause when compared with TNF-alpha inhibitors. The PRAC has now concluded that these safety findings apply to all approved uses of JAK inhibitors in chronic inflammatory disorders (rheumatoid arthritis, psoriatic arthritis, juvenile idiopathic arthritis, axial spondyloarthritis, ulcerative colitis, atopic dermatitis and alopecia areata).

The product information for JAK inhibitors used to treat chronic inflammatory disorders will be updated with the new recommendations and warnings. In addition, the educational material for patients and healthcare professionals will be revised accordingly. Patients who have questions about their treatment or their risk of serious side effects should contact their doctor.

The PRAC has confirmed its recommendation to withdraw the marketing authorisations for amfepramone obesity medicines. This follows a re-examination of its previous recommendation of June 2022, which was requested by the companies that market these medicines.

The recommendation follows a review which found that measures to restrict the use of these medicines for safety reasons have not been sufficiently effective. It found that the medicines were being used for longer than the recommended maximum period of 3 months, thereby potentially increasing the risk of serious side effects, such as pulmonary arterial hypertension (high blood pressure in the lungs) and dependency. The medicines were also being used in patients with a history of heart disease or psychiatric disorders, increasing their risk of heart and psychiatric problems. In addition, there was evidence of use during pregnancy, which could pose risks to the unborn baby.

The review considered all available information relating to these concerns, including data from two studies on the use of amfepramone medicines in Germany and in Denmark. In addition, the PRAC received advice from a group of experts, comprising endocrinologists, cardiologists and a patient representative.

The PRAC considered introducing further measures to minimise the risk of side effects but could not identify any that would be sufficiently effective. The PRAC therefore concluded that the benefits of amfepramone medicines do not outweigh their risks and recommended that the medicines be removed from the market in the EU.

The PRAC recommendation will now be sent to the CMDh2 for its consideration.

Comirnaty and Spikevax: heavy menstrual bleeding added as a side effect

The PRAC has recommended that heavy menstrual bleeding should be added to the product information as a side effect of unknown frequency of the mRNA COVID-19 vaccines Comirnaty and Spikevax.

Heavy menstrual bleeding (heavy periods) may be defined as bleeding characterised by an increased volume and/or duration which interferes with the person’s physical, social, emotional and material quality of life. Cases of heavy menstrual bleeding have been reported after the first, second and booster doses of Comirnaty and Spikevax.

The PRAC finalised the assessment of this safety signal after reviewing the available data, including cases reported during clinical trials, cases spontaneously reported in Eudravigilance and findings from the medical literature.

After reviewing the data, the Committee concluded that there is at least a reasonable possibility that the occurrence of heavy menstrual bleeding is causally associated with these vaccines and therefore recommended the update of the product information.

The available data reviewed involved mostly cases which appeared to be non-serious and temporary in nature.

Menstrual disorders in general are quite common and they can occur for a wide range of reasons. This includes some underlying medical conditions. Any person who experiences postmenopausal bleeding or is concerned about a change in menstruation should consult their doctor.

There is no evidence to suggest the menstrual disorders experienced by some people have any impact on reproduction and fertility. Available data provides reassurance about the use of mRNA COVID-19 vaccines before and during pregnancy. A review carried out by EMA’s Emergency Task Force showed that mRNA COVID-19 vaccines do not cause pregnancy complications for expectant mothers and their babies, and they are as effective at reducing the risk of hospitalisation and deaths in pregnant people as they are in non-pregnant people.

The Committee reiterates that the totality of data available confirms that the benefits of these vaccines greatly outweigh the risks.

Healthcare professionals and patients are encouraged to continue to report cases of heavy menstrual bleeding to their national authorities.

The PRAC will continue to monitor for cases of this condition and will communicate further if new recommendations are warranted.

Ustekinumab (Stelara): warning on use of live vaccines in infants whose mothers received ustekinumab during pregnancy

The PRAC has recommended adding a warning to the product information for ustekinumab (Stelara) on the use of live vaccines in infants whose mothers received ustekinumab during their pregnancy.

The product information already advises that it is preferable to avoid use of ustekinumab during pregnancy. People of childbearing potential are advised to avoid becoming pregnant and must use adequate contraception while using Stelara and for at least 15 weeks after the last Stelara treatment.

The Committee has reviewed the available evidence regarding use of ustekinumab during pregnancy, including observational studies from the EU, United States and Canada, as well as a cumulative review requested from the marketing authorisation holder.

Ustekinumab can cross the placenta. It has been detected in the serum (the fluid component of the blood) of infants who were exposed to ustekinumab in utero (infants whose mothers were treated with the medicine during pregnancy).

Although the data on ustekinumab are limited, the risk of infection may be increased after birth in infants who were exposed to ustekinumab in utero.

The PRAC’s recommendation will be forwarded to EMA’s human medicines committee (CHMP) for adoption.

Amfepramone medicines: advice to patients about other treatment options

This DHPC will inform healthcare professionals on the conclusion of the re-examination of EMA’s recommendation on amfepramone-containing medicines and on the need to advise patients about other treatment options.

The DHPC for amfepramone medicines will be forwarded to the Coordination Group for Mutual Recognition and Decentralised Procedures – Human (CMDh) and the DHPC for Janus kinase inhibitors will be forwarded to EMA’s human medicines committee (CHMP). Following the CHMDh and CHMP opinion, the DHPCs will be disseminated to healthcare professionals by the marketing authorisation holder, according to an agreed communication plan, and published on the ‘ Direct healthcare professional communications ’ page and in national registers in EU Member States. 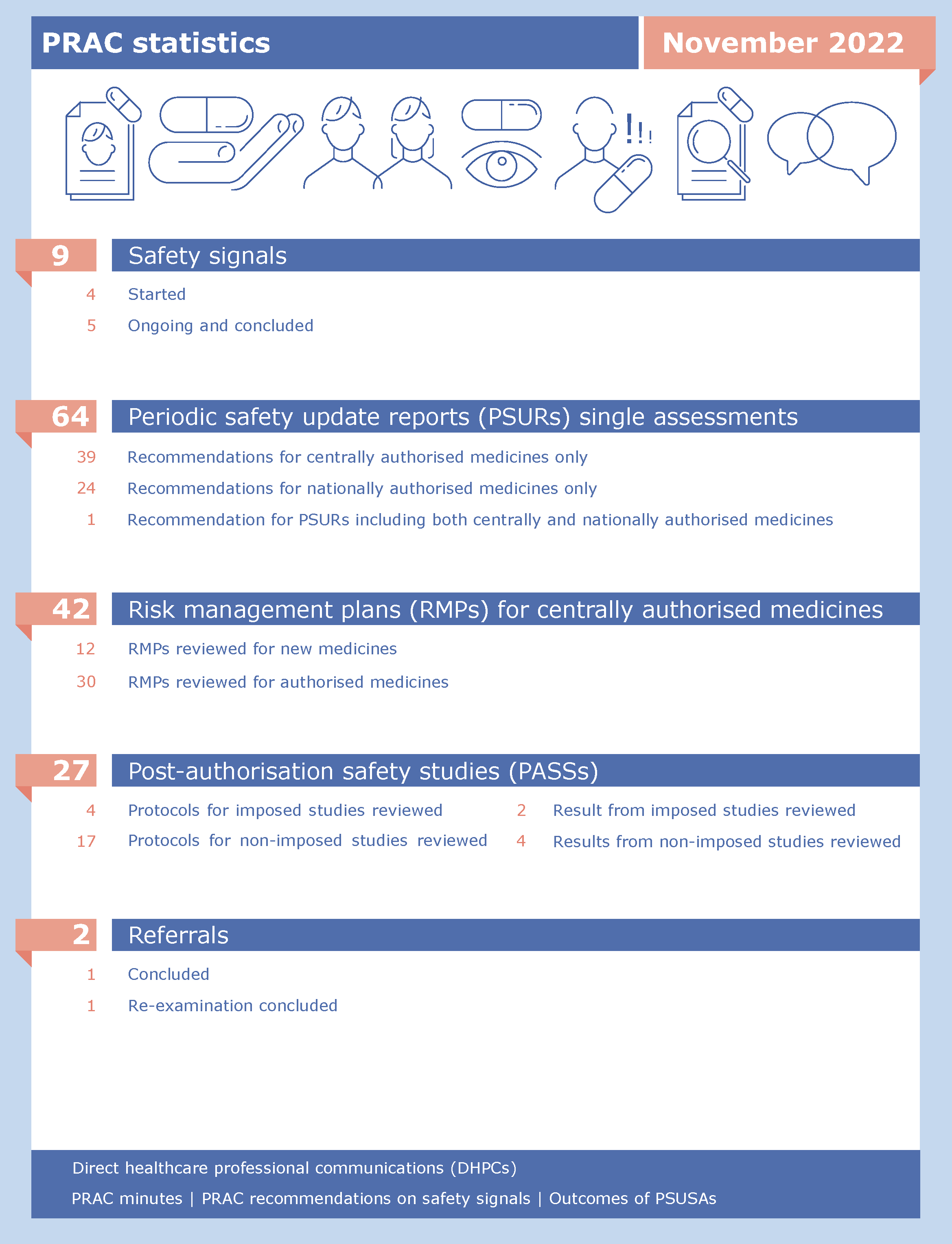