Advice on impacts of using antimicrobials in animals

The European Medicines Agency (EMA) is involved in monitoring and evaluating the risks of using antibiotics in animals. It has looked in particular at the risk of the development of antimicrobial resistance in animals and of the possible transmission of resistance to humans.

EMA is supporting the European Commission's One Health Action Plan against Antimicrobial Resistance.

The European Commission requested scientific advice from EMA in April 2013 on the impact on public health and animal health of using antibiotics in animals and measures to manage the possible risk to humans. The request was structured in the form of four questions:

Use of 'old' antibiotics

In 2016 AMEG revised its 2013 advice on the use of colistin in animals on request of the European Commission, following the discovery of a gene (called mcr-1) that causes bacteria to become resistant to colistin.

The updated recommendation advises that:

EMA published its updated advice in July 2016, after the CVMP and CHMP endorsed the AMEG opinion. This advice took account of a public consultation and an open call for scientific data.

EMA published its response in December 2014, following endorsement by the CVMP and CHMP and input from a public consultation. EMA's advice included:

Categorisation of antibiotics and preliminary risk profiling of new antimicrobials

In July 2017, the European Commission requested EMA to update the AMEG categorisation of antibiotics and to further elaborate on the proposed preliminary risk profiling of new antimicrobials (previously known as 'early hazard characterisation').

Preliminary risk profiling occurs at an early stage in the development of new antimicrobial veterinary medicines and considers the risk to public health of antimicrobial resistance and the need to implement risk management measures.

For an overview of the comments received during the public consultation, see: 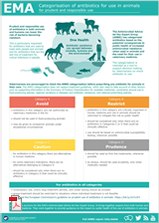